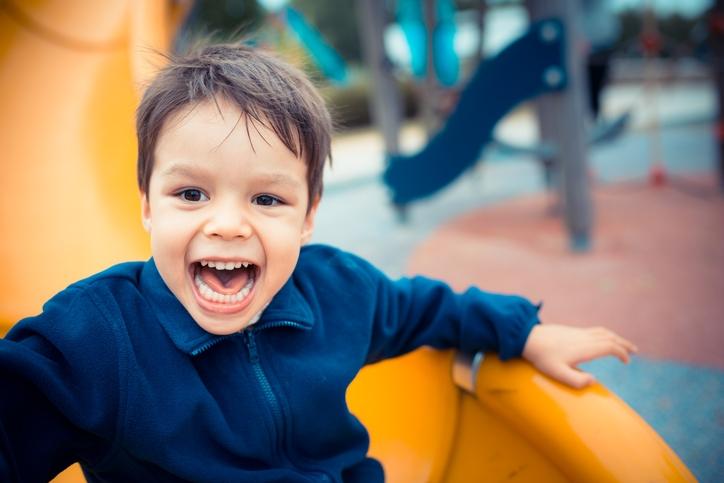 We've all said it a million, ka-jillion times: "Use your words!" There's something magical that happens when we put language to circumstances and events. Suddenly we are able to label things, and this helps our brains evaluate and store information, creating mental schemas for the world around us.

For toddlers, this labeling and naming is life-changing. Teaching your toddlers these words will take some time, but when they are preschoolers and have mastered their meanings, they will give you powerful tools to keep in your back pocket.

Here are 10 magical words and phrases that can make momming so much easier.

This word is necessary in so many ways. When kids start asking for sugary snacks at all times of the day, this is a word they need a handle on. Kids should begin understanding what’s healthy and what isn’t so healthy from an early age so they can make good decisions later on. Also when you have to say no because a snack isn’t so healthy, it will help them grasp the why behind your reason.

When we started potty training my son, he had – um – difficulty – with an audience in the restroom. I taught him how to ask for privacy and this was a great word for him. Now when I’m dressing or using the bathroom and I don’t want an audience, all I have to do is ask for privacy and he understands exactly what this means. Teach this word early and use it often!

It’s never too early to start having conversations about appropriate touching with children. Really, even though you think they can’t understand it, you should still tell them what’s okay and what isn’t okay. Designating areas as “personal” or “private” or whatever word you elect, is very important for kids so they can label and identify appropriate touch from inappropriate touch. Also assigning words gives kids a great tool to communicate with you if they ever have questions or concerns about their anatomy.

Does this one really need an explanation? Sometimes mom and dad just need to REST! It doesn’t mean nap, but it does mean to be quiet and still. My son was 3 years old when I first mentioned this word and I realized I should have taught it to him waaaay earlier. In his mind you were either sleeping or playing, there was no in between. Now he gets it, and understands I’m not asking for a nap when I tell him I just need some downtime to rest. It’s pretty magical, actually.

Room time is a non-scary phrase for independent play, which is very scary for littles! Again, I learned this one the hard way. It wasn’t until I was pregnant with my second child that I started throwing out the phrase “Hey, why don’t you go play by yourself?” Cue the red flashing lights and alarm bells. This was the WRONG thing to say to a 3-year-old. Instead, I learned from a friend to designate some “room time” each day. This is best when started at a young age, but it’s never to late to jump on board. Create a fun time of the day for your little one to play solo in his or her room. Make it short at first and build on the time gradually.

Gentleness just doesn’t come easily to toddlers. It’s a word that needs repeating often! Find ways to get your kids to practice gentleness. Maybe that means visiting the neighbor’s cat or touching something breakable with permission, which brings us to our next word.

Toddlers and preschoolers obviously don’t understand why they can’t hold and touch everything. Once I started to explain the concept of breakable to my son, I saw the light bulb go off. It was a powerful word in his mind and I use it often when we are shopping or visiting a friend’s house.

Again, I wish I could take credit for this, but it’s a phrase a friend of mine taught her son. When another child would do something unfriendly to her son, maybe a push or snatching a toy, she taught him to look at the child and say “No thanks!” It’s much friendlier than yelling “NO! Stop it!” And it also gives kids the control they desire.

How many times have you yelled “STOP!” while your kid runs 10 feet ahead of you? There’s one magical word you can use to actually get them to stop. I found that playing a little game called “freeze” taught my son the principal. We would play and run around and dance and then I would say the word and we would have to freeze in position. We practiced this frequently and we applied the word when we were out and about. He is 4 and I still use this efficient word all the time.

I didn’t understand the importance of this one – or how difficult it would be to teach – until I had my second child. When I was trying to breastfeed my daughter, my son would climb on me (seriously like I was a tree), of course for attention, and I quickly realized the need to teach him the concept of personal space. I wish I would have taught him this term sooner, but later is better than never.