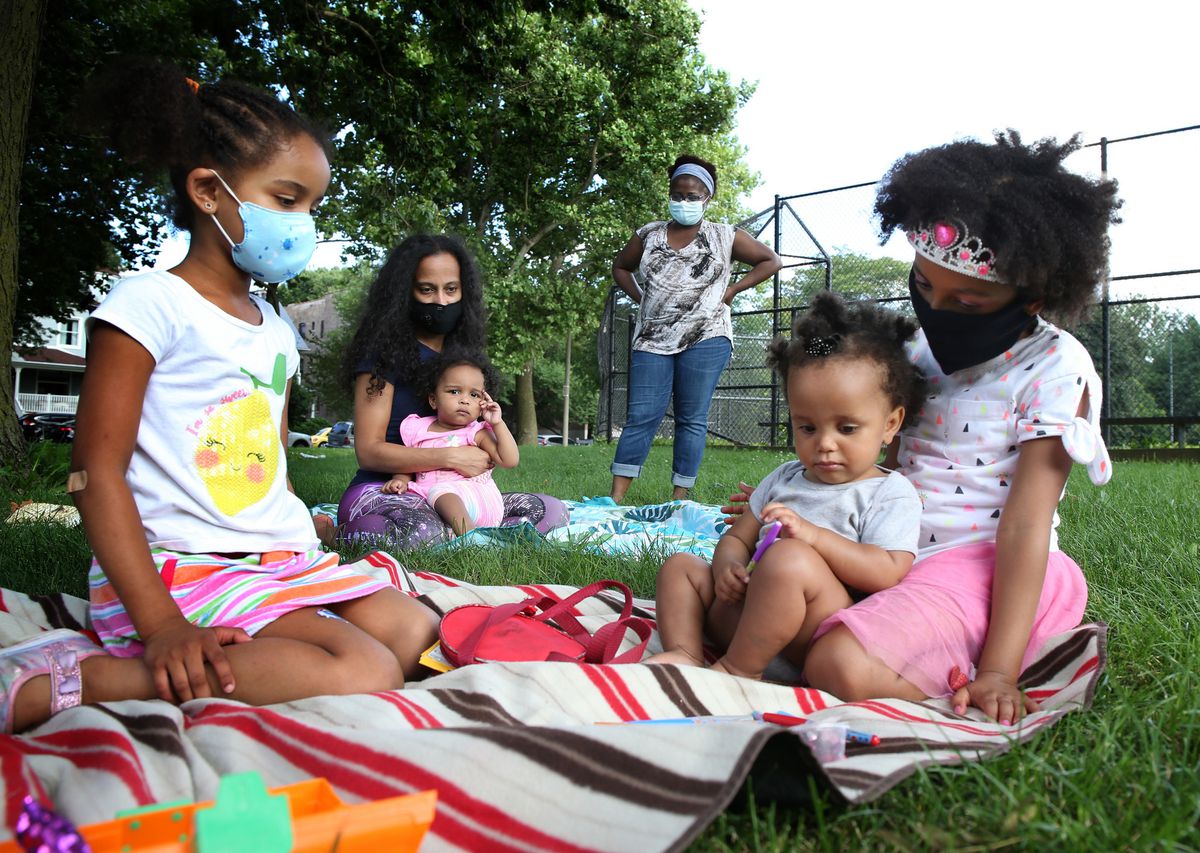 Chicago Tribune |
Jul 27, 2020 at 1:32 PM
Elena Nicole Britton, seated at center, and Tabitha Watts, rear, bring their daughters to a play date in Kenwood Park in Chicago on July 22, 2020. Britton said it was important for her daughter Blythe, 7, left, to have some social interaction. (Terrence Antonio James / Chicago Tribune)
It’s not just adults who miss their friends during this pandemic. For young children, it has uprooted the world of social interaction they receive from day cares, schools and scheduled play dates, socialization that’s important for their development and emotional health.
Elena Nicole Britton 42, from River North, has a 7-year-old and a 1-year-old. While her younger one hasn’t noticed that much has changed, her older child, Blythe, has found staying at home difficult. Some days she’s in high spirits, but other days she can’t help but miss her friends.
Advertisement
“She’s very sensitive. It was hard for her to articulate what’s happened,” said Britton. To help her, Britton has decided to let Blythe go on play dates with a few local families. They make sure to wear masks. Britton trusts the other families, who keep their kids at home if they feel sick and try not to leave the house.
The meetings always take place outside, with regular summer activities like running through sprinklers and playing with water balloons. Britton came to the decision to have play dates because she knew how important it was for Blythe to be social. “She’s a very social person. Our weekends used to be filled with social interactions and birthday parties,” said Britton.
Advertisement
In a Tribune story from March , safety recommendations over play dates were mixed. Scott Goldstein, a pediatrician at Northwestern Children’s Practice and instructor of clinical pediatrics at Northwestern University’s Feinberg School of Medicine, said it’s up to a parent’s comfort level, but small get-togethers with proper precautions should be fine.
[Most read] Second stimulus check updates: Senate Republicans set to roll out $1 trillion COVID-19 relief plan »
According to Dr. Amanda Moreno, an associate professor at the Erikson Institute in downtown Chicago and director of their child development program, children get the majority of their social skills from each other, not adults. Pretend play that adults might consider silly can teach kids about sharing and interaction in what Moreno said is a low-stakes environment.
Elena Nicole Britton, seated at left, and Tabitha Watts, right, bring their daughters to a play date in Kenwood Park in Chicago on July 22, 2020. Britton's daughters, Blythe, 7, and Bree, 1, are at left and Watts' daughters, Addison Parker, 7, and Avery Parker, 1, are at right. (Terrence Antonio James / Chicago Tribune)
“We call it socio-dramatic play. There are rules that kids imitate with what they see in adults and with their own rules,” said Moreno.
Hyde Park resident Keewa Nurullah, 37, had to put her children in day care because she works full-time. At the start of the pandemic, her 2-year-old and 4-year-old played together, but over time, they lost interest in each other. Nurullah’s 4-year-old, Faraz, began to miss his friends. Although there aren’t many other kids in day care because of the pandemic, Nurullah sees her son is excited again. “Since he’s gone back, I can tell he was so thirsty for friend time,” said Nurullah.
With her child already interacting with other kids daily, Nurullah said she wouldn’t consider play dates. She wants to keep Faraz’s exposure to others to a minimum and knows other parents are scared as well. She says interacting with children from different homes could be a health risk, and she hasn’t heard of other parents who are doing it. “I don’t really see play dates happening. I see people who maybe live in the same apartment building, or know another family’s patterns, or maybe cousins or relatives,” Nurullah.
Ask Amy Newsletter
10 ways to have a chic, safe, outdoor dinner party on the cheap
Jul 25, 2020
Online interaction is also helpful. Moreno said that although it’s not an exact substitute, watching YouTube videos for kids or video chatting can still teach children some of the skills they may be missing. “All of the second bets are good bets,” said Moreno.
Britton wants Blythe to get as much social interaction as she can because she doesn’t know what will happen in the winter. “If there’s not a vaccine until 2021, she can’t be kept from friends for that long,” said Britton.
Whatever kids can’t gain now, they’ll gain whenever they return to school or day care said Moreno. Moreno added that your kids won’t be the only ones who have a gap in social skills. “What’s different is this is happening all over. It’s not just the worry of kids getting left behind, because it’s all of them,” said Moreno.