Will the Pandemic Have a Lasting Impact on My Kids? 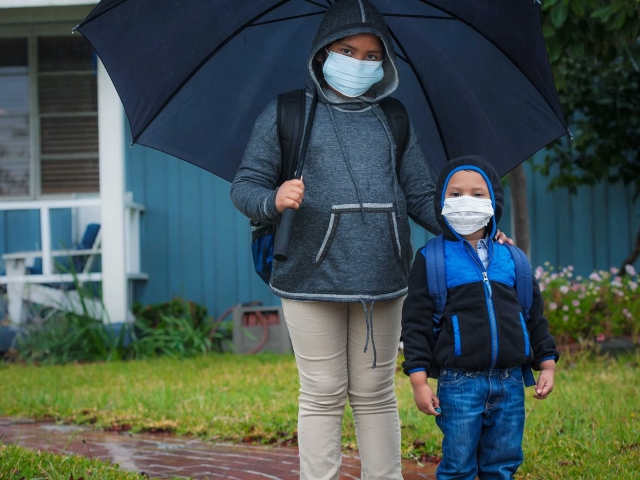 Massive unemployment. Stunning loss of life. Disrupted education. An economy in freefall. These are the ingredients for tectonic social shifts that alter the arcs of human lives. Parents are always at the fulcrum of such pressures, protecting their families while trying to hold together a semblance of normalcy.

For 100 years, developmental scientists have studied how families and children respond to disasters, manmade and natural. From the Great Depression to Hurricane Katrina, from 9/11 to wars and historic migrations, we’ve learned a few things about resilience.

Studies consistently show that certain conditions help children adapt well, and other conditions compound a child’s distress—but the overall message is a hopeful one. Given some basic support and protection, our children have remarkable strength and hardiness.

Research on children’s resilience began with developmental psychologist Emmy Werner who, herself, was a child during World War II in Europe. Werner survived with her cousins by “foraging in the ruins of bombed-out houses and in abandoned beet, potato, and turnip fields” when all of the adult males in her extended family perished on the battlefield or in prison camps.

As an adult, Werner studied the letters, diaries, and journals of 200 child eyewitnesses on all sides of the war in 12 different countries. She supplemented the children’s accounts with in-depth interviews with 12 adult survivors when they were in their 50s and 60s.

In her book Through the Eyes of Innocents, Werner writes that many of the children became adults who held “an extraordinary affirmation of life.” However, children who had the most direct exposure to the violence of bombing and combat suffered most. Many of the adults reported 50 years later that they still had frighteningly vivid memories of the sounds of air raid sirens, machine-gun fire, and low-flying planes. A study of 1200 British schoolchildren found that five years after the war, 18 percent still had symptoms of post-traumatic stress disorder (PTSD), such as intrusive fears, nightmares, sleep disturbances, and heightened reactivity to loud noises, at a rate comparable to that of combat veterans.

Studies of children in other conflicts, from South Central Asia to Rwanda to Ireland, corroborate that the dose is the poison. In other words, the degree or length of exposure to danger strongly predicts how much children will suffer later.

This was true in studies of 9/11 in New York City. The more children and adolescents were exposed to the attacks and the collapse of the Twin Towers, the greater their symptoms of PTSD, anxiety, and separation anxiety, especially if they lost a loved one. Children who were below Canal Street had four times the rate of psychiatric and physical health disorders as young adults, compared to children who were across the bridge in Queens and only saw media coverage of the event.

Takeaway: Children with the most direct exposure to the pandemic—for example, who lose a loved one or whose family is struggling with the disease, food shortages, or other deprivations—may be most at risk for psychological disturbances and should be prioritized for public services and community resources.

If possible, shield children, especially the youngest, from media exposure so that you stay in control of the messages. Four- to six-year-olds can handle minimal, manageable facts about why their lives have changed. Teenagers can take in more information and are interested in understanding how the world works and their place in it, though some caution is warranted—it’s helpful to have a wise adult in the wings to help interpret events and emotional responses. Staying constructive and action-oriented can help mitigate children’s chances of developing depression and feelings of overwhelm and helplessness.

Anna Freud, the daughter of Sigmund Freud, founded the Hampstead War Nurseries in England to care for children during the Blitz (the Nazi bombing campaign of the United Kingdom from 1940–41), and she and her colleague, Dorothy Burlingham, shared their observations in their book War and Children.

Air raids and bombings happened anytime day or night, they wrote. Some children saw death up close, some were buried in debris, and many were injured. Freud and Burlingham found that, remarkably, when children were with their family members during these events, they rarely showed “traumatic shock”: “They slept and ate normally and played with whatever toys they had rescued.” The children seemed to equate their experience with just another childhood “accident,” like falling out of a tree or getting thrown off their bike. That the war “threatened their lives, disturbed their material comfort, or cut their food rations” mattered little, according to Freud and Burlingham, as long as the children were with a trusted adult.

But it was “a widely different matter” if a parent was killed or if a child was separated from their parents. Children had a much harder time, for example, when they were evacuated to the countryside for their own safety. Separation was worse than enduring the bombings alongside their family, write Freud and Burlingham. This has been true in every war zone studied, from Rwanda to Bosnia and the West Bank to Syria. Studies find that if children lose the safety anchored by their secure caregiver, they often become desensitized to violence and increase in PTSD, anxiety, depression, aggression, and antisocial behavior.

However, the supportive adult figure doesn’t have to be a parent. Research suggests that any non-parental figure in a caring capacity, like a neighbor, teacher, counselor, coach, sibling, or cousin, can be just as effective. Long-term studies of children who have weathered adversity like poverty or even Hurricane Katrina consistently find that those who were the most resilient had the most supportive relationships outside the immediate family.

Werner also studied the records of pioneer families like the Donner Party, a small band of 87 travelers—half of them children—who took an ill-advised shortcut away from the Oregon Trail. They found themselves trapped in the heavy Sierra snowfalls, unable to move for four months. Supplies dwindled, and travelers resorted to eating their animal-skin rugs and animals; a few cannibalized their deceased companions.

A third of the children perished, mostly infants and toddlers. The surviving children were the ones who had the strongest social supports from mothers, aunts, cousins, and a teacher, who pooled whatever resources they had and mustered whatever shreds of normalcy they could, even when they were too weak to stand. Siblings, especially, shared food and drink, nursed the sick and injured, and were confidants and supports to each other when the going got tough. The majority of children who survived went on to lead “long and productive lives,” becoming lawyers, ranchers, writers, prospectors, and heads of large families.

Takeaway: Children are most resilient when they’re embedded in a network of social support: a parent, a caring parent figure, or siblings. Accounts like these suggest that the support that works for children doesn’t have to be overly precious or hyper-conscious. Rather, practical, positive decency offered by ordinary people will suffice.

For parents who aren’t able to care for their own children because they’re essential workers—or are sick and quarantined away from their families—the message is that other committed adults can pinch-hit as caregivers just fine.

When uncertainty or danger strikes, children are “wired” to look to their caregivers to interpret how safe they should feel. If their primary adult is calm, a child feels reassured. But if their adult is upset, the child feels unsafe, and their body and brain go into threat mode. And when the threat system is on too long without relief, physical and mental health problems can result.

In providing loving care, the parent’s own emotional state matters. Freud and Burlingham write that most of the London population met the WWII air raids with a “quiet manner.” For example, they describe one Irish mother of eight whose windows were blown out in a bomb blast. When she showed up at the clinic, she said that they were “ever so lucky” because her husband was there and could fix the windows. Another mother brought her daughter in for a “cough and cold” but didn’t think to mention that they’d just escaped a bomb shelter destroyed in a fire. Due to the mother’s “lack of fear and excitement,” Freud and Burlingham write, the child “will not develop air-raid anxiety.”

By contrast, they noticed that very anxious mothers had very anxious children. For example, one five-year-old boy developed “extreme nervousness and bed wetting” when he had to get up in the night, get dressed, and hold his trembling mother’s hand.

Recent research finds that the presence of a calm adult can even reduce the levels of cortisol, the stress hormone, in a child’s body. In fact, supported exposure to manageable stress can be “inoculating,” helping children to be more resilient, whereas complete avoidance of stress undermines the development of resilience.

Takeaway: For stressed parents at home caring for children 24/7 and trying to work: Put on your own oxygen mask first. Your self-care is essential. It’s a challenge to bring your best self to this quarantine day after day, but your well-being is vital to you and your children.

And rest assured, you don’t have to be perfect. Some research suggests that even in the healthiest relationships, parents are only “in tune” with their children 30 percent of the time. What matters more is your flexibility to repair, regroup, and try again. Apologies, forgiveness, and self-compassion are key. Remember, the biggest lesson your children are learning from you is how to handle themselves in a stressful situation.

Many studies of resilience find that survivors who do well have strong philosophies or spiritual traditions. Ann Masten, professor at the Institute for Child Development at the University of Minnesota, writes in her book, Ordinary Magic: Resilience in Development, that many faith traditions—including Buddhism, Hinduism, Judaism, Christianity, and Islam—incorporate all of the ingredients for resilience. They offer guidance for parenting and moral conduct; provide role models, mentors, and community support; teach and invite practice in self-regulation; and place a value on the greater good.

A connection to the divine, or a philosophical framework, or a connection to cultural traditions, each help survivors to make sense of their experiences, and in the process help them keep calm. Even finding awe in the moment may just be enough for now.

Long-term research in Kauai found that many adults who eventually created happy lives after adverse childhoods drew from their cultural heritage, becoming involved in Hawaiian conservation efforts, going to the ocean in times of trouble, or caring for their elders.

Recent psychological work suggests that having a sense of purpose helps, too. When children are able to pitch in and contribute—in their families or their community—they develop mastery, they feel valued, and their confidence grows.

Takeaway: A connection to something greater than oneself—whether it’s a spiritual practice, cultural beliefs, or a sense of purpose—can help families and children orient their thoughts, feelings, and actions. Children, even very young ones, enjoy and benefit from these kinds of feelings and experiences.

Children are neither inherently resilient nor inherently vulnerable. Instead, their well-being arises out of who they are as individuals together with the cascades of experiences they have. Some children may luck into competencies and circumstances that set them on a good path early on. But even for children who don’t do well initially, studies of the life course show that many can still find happiness later from a new opportunity, education, a good relationship, or a fulfilling career.

For now, the world is in a difficult state of uncertainty. We don’t know the course of the virus, the full economic impact, or what “normal” life we’ll resume. But the enduring lessons for our children will surely be the emotional ones. These are the lessons they’ll remember as adults when they inevitably experience upheaval again—only then, it may be without us. So let’s stay focused on, and grateful for, what really matters.

This article is excerpted from a longer article on Diana Divecha’s blog, developmentalscience.com.